R and I are on this fitness track. Both of us are trying to lose weight, so we bought Fitbits, and have been walking. I’ve upped my yoga game, and we’ve been cooking more (and healthier) at home. So far so good!

Something I’ve noticed though is that since we’ve started this, I have a really hard time sitting still! Relaxing has never been an issue for me, but lately, I’ve been pretty charged up. This means that settling into a book can be challenging. I read in shorter spurts, unless it is something that really holds my attention.

Normally, I can go through two books on a weekend, unless it is something really long. 500 pages doesn’t really scare me. It might take me a day and a half…but it doesn’t pose too much of a challenge. When it’s day 3 and I’m only halfway through, that usually means I’m not so interested. 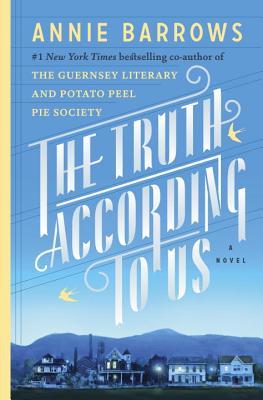 The thing about The Truth According to Us isn’t really the characters or the setting this time. I actually like the idea of the book itself–a senator wants to teach his daughter Layla some work ethic in the middle of the Depression, so he sends her to a tiny town in West Virginia to write its history for the WPA. Of course, she hates the idea, but the more stories she hears, the more she falls in love with the place and its people. There’s also a little girl (an almost Scout-like character) who follows her around, trying to figure out what she’s up to. At first, she worships her, then it because more suspicion.

Part of me really wants to know what happens, but I just can’t keep going. I am so incredibly frustrated with the writing. Actually…it’s not even that. It’s really just the narration. I can’t freaking figure out from page to page who is talking! One moment, it’ll be 1st person narrative from Willa’s (the little Scout personality) point of view. Then you’ll have a not even a chapter break, but just a section pause, and it’ll shift to third person narrative overlooking everyone. Then the chapter WILL break and there will be some letters between Layla and her friends, and it’ll be more third person, but more from her perspective…until you go back to Willa again with little warning. Oh my gosh. It’s so frustrating and confusing. I can’t keep straight what is going on.

I was seriously reading a chapter where Willa was talking in 1st person and a paragraph later “they” were all sitting in the kitchen, Willa included. HUH?

Nope. Trying to figure out who is in the frame and if the narrator is omnipresent is just making me crazy. That is why it is taking me so dang long to read this book. It’s giving me a headache, and it’s just not worth finishing. I hate quitting ARC reviews halfway through, but I just can’t do it!

The Truth According to Haley is…don’t read this one unless you have a LOT of patience.

NetGalley provided this ARC for an unbiased review. It is being released today, June 9th, 2015.

Fulfills PopSugar #50:  A book you started but never finished

One thought on “The Truth According to Us”