Trolls get a pretty bad rep in the fantasy world. They are dumb, slow, dirty, mean. Really the only likeable trolls I have ever seen have been in Frozen…I’ve yet to see Boxtrolls, so maybe those are ok too. But for the most part, trolls are pretty foul creatures. 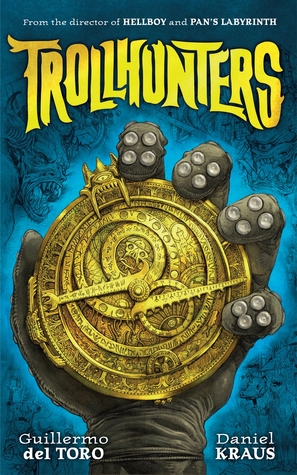 The mind of Guillermo del Toro is a wild and crazy place, so when I saw he had a new book coming out, I jumped at the chance to read it. I was not disappointed.

There’s something afoot in San Bernadino. It begins in 1967 when hundreds of kids go missing suddenly. Then, just as soon as it began, it stopped. Now, it’s starting again. Jim, whose dad has always been afraid of his own shadow, is starting to wonder about those bumps in the night. But when those “bumps” come for him, he finds out they are actually recruiting him to help save the town from the real problem–the Voldemort of the troll world. He had been defeated in 1967, but now he’s back, and seriously pissed off.

Trollhunters is no sophisticated novel, my friends, but the kids are going to love it. It’s akin to Goosebumps and Gremlins, and everything wonderful about middle school horror from the 80s and 90s. Deliciously ridiculous and just enough cheese and slime. Put this in the hands of a 10 year old and they will not come out of their room until it is finished. It’s one of those books that you just expect to find on a library shelf in worn paperback–I mean, did the Goosebumps books ever actually look pristine, or did they just come off the printer torn and dirty?

I’m not sure if del Toro has plans for a movie on this one. 2015 is almost too high quality for it. It needs to be on a fuzzy VHS tape. You’ll know what I mean when you read it.

NetGalley provided this ARC for an unbiased review. Published June 30.