As much as I read in my childhood, I never read comics. They have always been out of my circle of geekiness. I knew a few boys who read them, and my grandparents (who were huge garage sale shoppers) always had a few Archies in their basement, but that was all I really knew. My world was centered on books, books, and…more books.

With the advent of superhero movies, Tumblr fandom, cons, and everything else associated with geek today, comics are coming back. Fans are able to network and gab about the latest issues, the lack of diversity, and push for more indie artists. I have a LOT of friends now who read comics, even a few who draw them. And yet, I still don’t read them. Why? I don’t really have a good reason, except I didn’t know where to start. That and the financial anxiety of weekly pull list commitments.

But, I do want to learn more about this world my friends love so much. It’s time to expand my geek. And so I was trying to figure out where I was going to begin….months ago. Sigh….

Then my friend sent me a care package, and included Hulk:  Season One. The green giant has been kind of a symbol of my depression–the evil beast fighting to get out, the gentler, smarter side fighting back with science. You get the picture. If I was going to start with Marvel, Banner was a good place for me to begin, so I appreciate her sending me my first graphic novel! 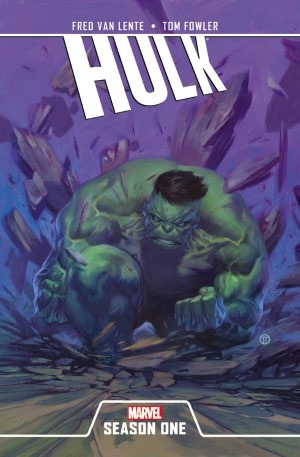 I’ll break this down into two sections. Again…first graphic novel ever…this is going to be a learning process.

Story/Writing:  Boy was this dark! I had heard people say The Hulk was a dark story, but this is not The Hulk I knew at ALL. Obviously, this is not the Avengers Hulk, and maybe I’ll do some reading to see where all that fits in, but he is not a superhero here. I kept waiting for that to happen, and it didn’t. The explosion happens, Banner doesn’t die, and his superiors are pissed that he’s still alive? Ummmm ok? Thanks a bunch, asshole. The misogyny in this book is horrible, by the way, and the jokes are totally crude. I had to look to see when this was written–I was expecting 20 years ago, not 2012. I was also extremely confused by Banner vs Hulk. In the interpretation I am used to, Banner IS Hulk, but in this book it seems that they are two split entities/bodies. At first I thought they just had two different consciousnesses warring with each other–that would make sense to me–but about halfway through I think they were no longer even in the same place. I wasn’t entirely sure how that split happened or why.

Art:  The aesthetics of this book were not to my taste, but that doesn’t mean they were necessarily bad. They are definitely for a more traditional, hyper-masculine sort of fan. The men are jacked up, and I’m sorry…but no female scientist is going to be in a mini-dress and knee high boots with exposed legs and an open labcoat. Nope. Sorry boys. I did, however, really like the super close up panels of The Hulk “hulking out,”–like the shots of his eyeball or the sound-effects. There’s also a great one where Banner is walking with a clipboard in his hand and The Hulk is ginormous behind him (again, I thought it was representing his subconscious…but maybe they really are split at that point).

I definitely much prefer Movie Hulk–and maybe I’ll look into reading something with the Avengers, so I can see the difference. If you have any suggestions, I’d love to hear them. This was a little dark for me, and the art wasn’t to my taste. But…now that I have a bit of an idea how to read a comic and what I am looking at, I have my foot in the door! AdultBooklr does a monthly Graphic Novel readalong, so maybe I’ll start participating in that.

What do you think? Should I add Graphic Novel reads to the blog?