I haven’t done a movie adaptation in awhile, but I got to see a free pre-screening of Dark Places Tuesday night, so I felt I owed a review. 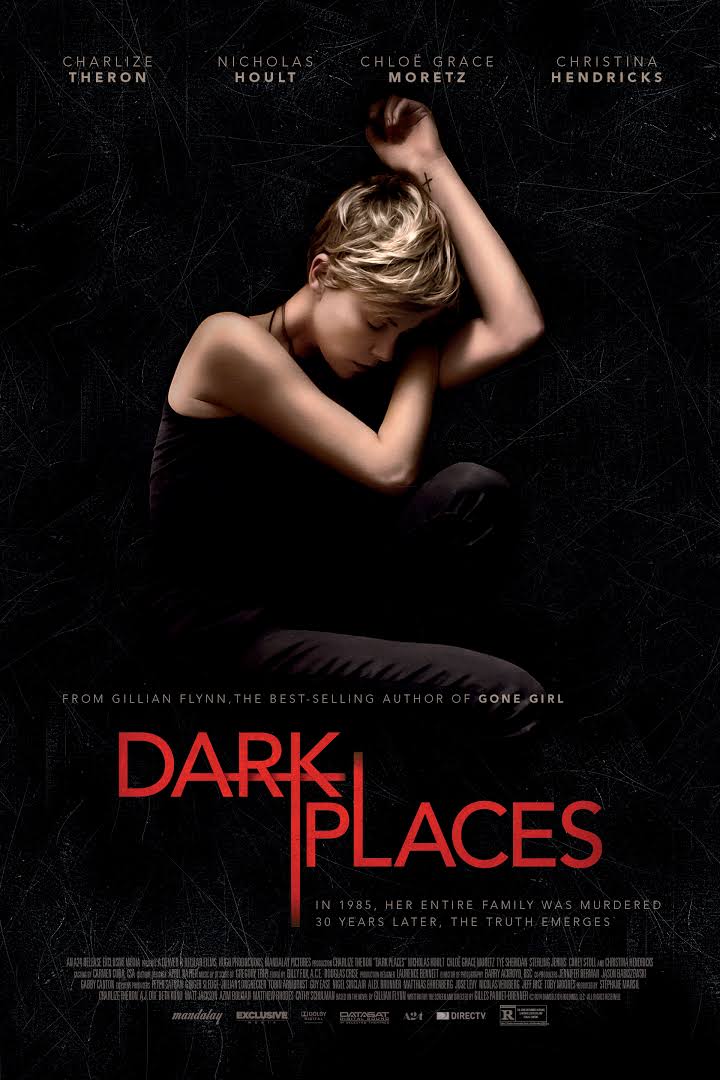 First things first, before I even get into the meat of it, I want to give a warning to those who need it, because there wasn’t one on-screen:  IF STROBE LIGHTS BOTHER YOU, DO NOT SEE THIS MOVIE. Or at least proceed with caution. There is a huge scene about a quarter of the way through, when she goes to The Kill Club with EXTREME strobing, so just be aware of it. Also, a lot of the flashbacks aren’t strobe, but they are a really funky black, white, sepiaish coloring. Almost negative filmy type effect, but whatever it was, it really hurt my eyes. I don’t have seizures but we were pretty close to the screen and I definitely left with a headache.

Ok, on with the review:

From what I understand, Dark Places was actually a French production, made before Gone Girl. But, even with the superb casting, they weren’t completely sure how it would go over in the US, so they held off on the release. Then, when Gone Girl became a smash hit, of COURSE they had to bring it out. I’ve seen nary a trailer for it though, which is sad because while I don’t think it would make near as big of a smash, I think a lot of people would go see this if they knew about it.

It’s a much different film than Gone Girl is, however. Instead of being so high impact drama, it’s more slow and steady. You get the present day plot mixed with the flash backs. Sort of a look this way while I show you something else, make you think one thing and actually the reality is something else entirely. Gillian Flynn is fantastic at this. Her sociopaths never look like sociopaths until the very end.

As I said before, the casting here, at least for the main characters, is superb. Charlize Theron was excellent…but, is she ever bad in anything? How can she be so goddamn gorgeous in greasy short hair and the same dirty shirt all movie long? Oh. Right. She’s Charlize freaking Theron. I did alter my vision of what adult Libby’s life looked like in my previous book review. I think the movie nailed what Flynn was going for–and not at all what I had imagined. It fits much more with who she would have been.

But, in the end, it’s not about the beauty, it’s about the acting, and these two both got their characters down perfectly. We’ve seen them in extremely sophisticated roles, but here they are both in very raw, emotional ones, and the performances were really powerful.

At first, I wasn’t sure Nicholas Hoult was the right choice for Lyle. He’s very young next to Theron, and I balked a bit because in the book, she’s only 30. But, they expanded the time gap a bit in the movie, so it made more sense. Also, for once in, well, EVER, the writers did not make this movie about romance at all. There were plenty of openings for them to do that, and yet they refrained, and I was grateful they didn’t change that part of the story, especially in one where there was so much PTSD, pain, and recovery happening.

This movie is going to be released tomorrow, August 7. I’m unsure how broad of a release it will get, but if it’s showing near you, go see it, especially if you like brain twisters and thrillers. This one isn’t so much on the racing plot thriller type, but more of a plot twist type. Definitely worth a showing.

Disclaimer:  My friend got free tickets to see this screening at Angelika Theater Dallas from her work and was kind enough to share one with me.