I recently read a Tumblr thread about how important it was to understand the historical context of the books we read. It was a debate over whether we should take Lord of the Flies at face value and ONLY read it in the context it was written in (which I didn’t really understand), or use that historical context to interpret it in our own time period and cultural situation now–which is what teachers and students and readers have been doing in every single class since the book was published.

My opinion is that historical context is extremely important. A book is going to make so much more sense if you know a little bit about the period and culture that you are reading in (hence my frustration with early French lit…we’ve discussed this…I’m working on it). Even fantasy books like Game of Thrones just blow up when you understand that it was based on the War of the Roses, and the Dothraki are essentially Mongolians.

However, every single person who reads a book is never going to read THE SAME book. Because none of us is the same person. We all interpret things differently based on our life experiences, and that effects our reading. So do the current events happening around us. So yeah, historical context is extremely important, but hardly ever can we take fiction at face value. There’s way too much to be learned and gained from it. 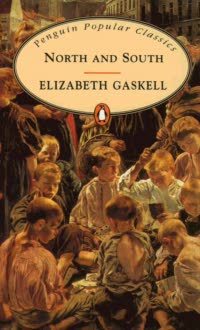 The reason all this comes to mind is when I started North and South at the end of this week, Twitter was blowing up with the news of Rachel Dolezal–a woman who pretended to be black and became the President of the Spokane NAACP. So as I’m reading a book on Industrialism in England and unions and strikes and two classes ripping each other apart…I’m watching the social media sphere do the same thing, over race.

This quote, in particular, stuck out at me:

“I don’t know–I suppose because, on the very face of it, I see two classes dependent on each other in every possible way, yet each evidently regarding the interests of the other as opposed to their own; I never lived in a place before where there were two sets of people always running each other down.”

I am not writing this to make any commentary on Friday’s situation. For me, I very much want to see there be a resolution to all this strife that is going on, I just don’t know how or what or when. That isn’t my purpose here, though.

Sometimes, I read a book, at the exact right time. When I started North and South, I was completely underwhelmed. It was very slow to get started, and I really didn’t understand what was going on. Then, I got to Margaret’s very impassioned speech, which includes the quote above, and it all just clicked. I even went back and reread some of it because once I got it…I got it. And putting a book written in a different time, with a different historical context (industrial unions vs rich factory owners), in a current setting (the very real racial tensions that have been escalating), made it so much more clear.

This is a very strong book. There is a bit of a romance element, but it is literally the last important thing. I’m not going to say I enjoyed it, but I definitely learned from it. And sometimes, that’s the goal.

(Oh, and Mr. Bell? I’m not the only person who thinks he’s gay, right? He almost seemed more a character from Oscar Wilde.)

Staying true to the norm, once again I am way behind on another very popular YA trilogy. Everyone started OOING and AAHing over In the Afterlight  by Alexandra Bracken when it came out this year, and when I looked it up–what? It’s the last book?!?!?!

Lucky for me, the release of the final book meant that Hey! The first ebook was free on Amazon. Woot! So, I’m catching up.

The Darkest Minds can be described, basically, as another one of those love triangle dystopian YA trilogies, but there’s quite a bit going on–and from what I can tell, at least, the love triangle only seems to last for this book. At least the third branch of it. *shudder*

But let’s back up. The story begins with a sickness that rages through the children of the United States, hitting around age 10. It seems to have no effect on adults, as it is linked to the onset of puberty. Most of the children die instantly, but those that aren’t killed take on 5 different styles of superpowers. And the adults are absolutely terrified, so they send them all off to internment camps. Great parenting, huh?

This book is basically Lord of the Flies in modern times, except the adults are still around, and absolutely pissed off. The setting is very zombie-movieish, without any zombies. Everything is complete and utter destruction, everyone lives in camps outside the city because the economy has completely tanked. It’s madness.

The concept is pretty brilliant, really, and terrifying. I will say that the book is a little confusing at first, but once you start to understand Ruby, everything falls into place and the action picks up. This is a trilogy I’ll be continuing, and I wouldn’t be surprised to see a movie come out of this one either. It wouldn’t be a hard world to design since it is based on reality, and it’s quite a different concept from what is already out there.

Fulfills PopSugar #34:  A book with a love triangle