But there is scary horror psychological thriller creepy…

…and then there is legit sexual predator “all my hair standing on end because this person is just not right” creepy. Sometimes it’s a fine line, but there is a difference. One gives me goosebumps. The other makes me want to puke. 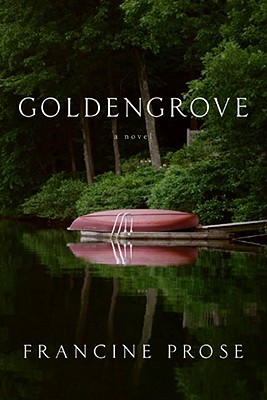 At first, Goldengrove is just sad. It’s a book about grieving and healing. The oldest daughter in a family of four has a heart condition, and dies suddenly, leaving her younger sister and parents to mourn.

Pretty simple premise for a book, really. The dad buries himself in his work, mom finds solace in pain medication for her arthritis. Unfortunately, that leaves the 13 year old daughter without much of a support system, and so the only other friend she has is her sister’s boyfriend, Aaron, who is also grieving.

The problem is that Nico looks so much like her sister that Aaron’s grief becomes very confusing. He starts asking of Nico some pretty creepy things. Small requests at first, but they get bigger and bigger.

As an adult, looking in from the outside, I was screaming at her to stop. But it was like that frog in a pot of slowly heating water. She didn’t realize what was happening until it was boiling over. To be honest, I’m not sure Aaron did either (although his response does make me hesitate on that), but it was still just…creepy. *shudder*

The book itself wasn’t bad. The writing was great, to be honest–and obviously I had a very real emotional response to it. It’s one of those books that I don’t know how I feel about it. I can’t say it’s a “good” book, because the emotional response I’m having is not a good feeling. But it is a well written one. It’s a book that probably should be read, for awareness and emotion, something like reading All the Rage, just go into it knowing that it’s not going to be entertainment or relaxing.