I am always on the fence on whether I should review a book I did not finish, and whether I should count it as “read.” And sometimes, I will even battle through a book just so that I could do those two things without guilt. Other times, it just isn’t worth it. There are other books to read, and today is my day off. After getting through half, it’s time to move on. 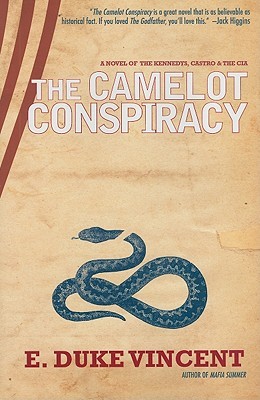 But first, why didn’t I finish The Camelot Conspiracy? Mostly, it’s just not my genre. This is very much what I call a “husband” book. Honestly, the entire time it has been on the shelf, I’ve thought it was nonfiction. The cover looks like one of those political histories, or whatever you want to call them. So when I read the author’s note and was informed it was actually a novel, I was very surprised! I’m trying to make my rounds through all the books in our collection…even the ones that aren’t “mine,” so I can read a bit out of my comfort zone, and this one came up in my cycle.

It didn’t start terribly. It was actually a little interesting for the first 100 pages. However, there is a lot going on, and I don’t know a lot about the Bay of Pigs and the Cold War. It’s not a period of history that is of particular interest to me, so a lot of the historical figures, dates, landmarks, etc were pretty fuzzy. I probably need to freshen up on my research into that era before I try to read fiction about it.

There also were SO many chess pieces in this game to keep track of. This is a novel of conspiracy, after all, and it got very confusing, very fast. I think that’s what did it for me in the end. Once I got lost…I was done for, and it no longer held my attention.

One more note–the editing in this book is a mess, which drives me absolutely insane. The quotation marks are so very often misplaced that it is hard to tell who is talking or when a conversation starts and ends, and sometimes they are missing altogether. Stuff like that just makes me nuts.

So there you have it. I don’t like to give bad reviews often, but I just couldn’t get behind this one.

“If there was a clandestine operation in motion that he didn’t know about, he damn well wanted to know why. He’d have to tread lightly in the halls of an agency dedicated to secrecy but if something were flying under the radar, he’d dig it out.”