I guess by now you have figured out that there isn’t a subject that I won’t read about. Nearly every part of the human experience is interesting to me–romance, psychology, war, birth, death, just life in general. People interest me. Everyone has a different story to tell and I want to read them all–fiction and nonfiction. 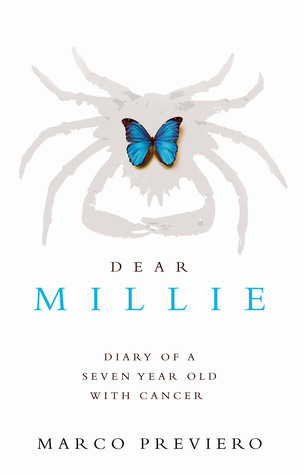 In this case, Marco Previero has written the true story of his daughter’s fight against a rare form of brain cancer, or at least the first year of it.

His seven year old daughter Millie was diagnosed with a brain tumor after she complained of “fuzzy eyesight.” What she didn’t tell Daddy was that she could just barely see out of her left eye, and no longer had vision at all in her right! Thus began a long and painful journey through lots of doctors and tests and treatments.

Marco’s diaries are very detailed and full of scientific language–it’s obvious he did a lot of necessary research during the course of his daughter’s treatments. This is not “Grey’s Anatomy” doctoring. This is the nitty gritty, really unpleasant, “what happens while those TV surgeons are off doing God-knows-what in on call rooms” stuff. It isn’t really all sunshine and rainbows like our TV-watching brains like to think. I’m sure somewhere in the back of our minds we know that…but it sure is nice not to think about recovery time or reoccurring tumors or the long drawn out and lethal kinds of cancer.

That’s the kind of information Marco gives us in this book. And it is very informational–more than emotional, as I expected it to be. Now, don’t get me wrong, the author definitely discusses his emotions. But he is almost removed from them, as if he is describing someone else. And maybe that is on purpose. I would imagine the stress and grief and everything else a person in Marco’s position would experience would be extraordinarily overwhelming to feel, let alone write about. However, it does come across a little cold and medicinal.

The main purpose of this book is a letter to his daughter. It also thanks a great number of people who helped the family through this difficult time. Those are the first two audiences. Past that, the book is mostly informative, and seems to be directed towards people in a similar situation–families battling cancer. Overall I think it is a well written narrative from an extremely brave father who went to hell and back in a year.

Disclaimer:  NetGalley provided this ARC for an unbiased review.