Julia Pierpont’s book isn’t out until July 7, but I am already seeing the cover everywhere. Of course it’s on Goodreads, but people have been reblogging it on Tumblr, and I’ve even seen it on Twitter and Facebook already. That’s pretty cool for a new author! 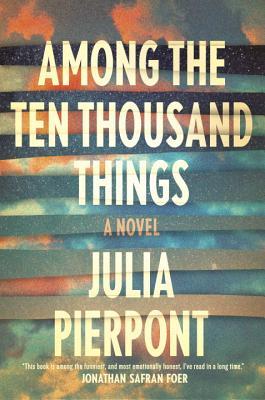 I put together my June TBR list the other day and realized I had this ARC waiting to be reviewed. No wonder it sounded so familiar!

The story, in my opinion, is a little ordinary. Just another man cheating on his second wife who was originally his mistress, and then playing the victim. No big surprise there. Teenage angst caused by the lousy father. I was a little underwhelmed by the characters and overall plot. And there were some weird jump cuts in the timeline. Part 1 and 3 are “present-day,” but 2 and 4 make very little sense.

HOWEVER–every once in awhile there will be nugget of consciousness that is absolutely brilliant. Something one would actually think about if one were letting his mind wander in an idle moment. Those brief moments of (what is the opposite of clarity?) are what make this book relatable and memorable. Those rambling thoughts are why people will recommend this book to a friend, even if they don’t know why they liked it so much.

I’m on the fence about this one. I felt really blah about most of it. It wasn’t bad, but the characters were missing that spark. Those stream of consciousness breaks were the one bright light that kept me going, and I was continually looking for them. It was like digging for one more piece of cookie dough in a pint of ice cream. Without it, it’s just vanilla.