Did you know that The Last of the Mohicans is actually a series? We see series all the time now, but we don’t think about them much back in the 1800s. Maybe they happened more than I realize. I’ve seen books with multiple volumes and one title, but this is the first I’ve seen in an actual series like this. 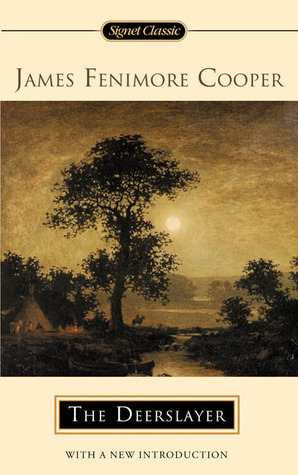 James Fenimore Cooper wrote The Leatherstocking Tales about an adventurer called Natty Bumppo–a white man who was raised among the Delaware Indians in the what is now New York. Even though he was raised among the Native Americans, he loathes the idea of harming his own kind. He hunts (giving him the nickname of Deerslayer), but he does not like the idea of war. He crosses paths with two white men, Hurry Harry and Floating Tom who have taken up scalping for trade, and try to convince him to do it with them. He tries to convince them to stop, but they don’t listen and are trapped by the dangerous Huron tribe.

I liked Bumppo’s character. He’s a good man, and he just wants to be left alone in the woods. Also, he’s asexual. He has a chance to marry the beautiful girl, and he says, “Meh…no thanks, I think I’ll go back and head off back in the trees, but thanks. Let’s just be friends, k?” He joins the fight because he has to get the idiots out of danger, but I got the idea that it was really really complicated and was just messing things up for him. Towards the end, Judith asks him if he wanted to fight and he tells her that while he can now claim the title of Warrior, he hates it and fights only out of necessity.

Also, the descriptions of the land are beautiful. This is written by someone who has spent a great deal of time in upstate New York. My Coursera professor added this to our historical fiction syllabus–which is why I am reading it now–and he showed us a picture of the lake Cooper references. The details are perfect, down to the exact spherical boulder on the shoreline.

However, I struggled a great deal with the racial context. I think sometimes it is hard for me to remove myself culturally from what I know now about the struggles/pain white men have caused in this country. I’m not even sure if that sentence made any sense. But even though I know in my head that Cooper was using the terminology that his characters would have called “injins” and “red men,” it still just makes me cringe. Bumppo and Hurry Harry have a pretty heated debate about the differences between white men and red men–Bumppo is trying to convince Harry that all men are equal, even if culture and tradition is different–and it just gets really ugly. It hurts my heart to know that I could pick that conversation up, take out “red” put in “black” and drop that conversation pretty much anywhere in the US right now, and it would still fit exactly.

I don’t talk about that subject much, mostly because I don’t know what to say, and what I mean will never come out right. But that part of the book really got to me, and I couldn’t leave it out.

There isn’t much else–the book is a little hard to follow at times. It is pretty chaotic. People have multiple names and there isn’t a whole lot of setting buildup. This is one that I read Wiki before I reviewed to make sure I understood what I read. I’m not ashamed to admit it, people!

This isn’t really a book I’d recommend, unless you really like old adventure stories. But, I know I’m going to have to read The Last of the Mohicans at some point for the Boxall 1001, so I stuck it out.

Seriously though, I am going to make someone else write my TBR for September. Why did I do this to myself? WAR WAR WAR DEPRESSED WARWARWAR DARK WAR