When I was growing up, Helen Keller was known to me as a little girl who was dealt the worst card imaginable–no sight and no hearing. I had seen the movie at school and it’s brevity made me intensely grateful for my abilities. I’m sure we watched it in an effort to promote our knowledge of diversity–in a small school without a lot of variety, such help was important. But I don’t remember the movie showing much about Keller’s life other than her horrible fits and the triumphant moment at the water pump.

I can’t be alone in that impression, because today Helen Keller has become a horribly offensive meme. Even before memes were a thing, there were crude jokes about her disability–similar to Chuck Norris jokes only cruel instead of badass. The movie meant to show a girl’s victory instead highlighted too much of the bad, not enough of the good. And unfortunately, we are too immature to handle that kind of strength. 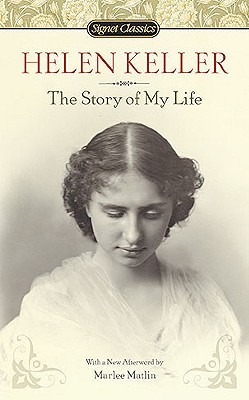 Those were the thoughts I had when I picked up The Story of My Life. I wanted to know what actually happened to the little girl at the water pump. There had to of been more, or we wouldn’t still be talking about her.

She wrote the first of her memoirs at 21, while at college. College! School was hard enough for me with all of my faculties, I couldn’t imagine going with two major senses gone–and she does describe the struggles she had. She also goes into as much detail as she remembers of the time before Anne Sullivan arrives on scene (no mention of the water pump), and many other moments in her life.

Her writing is beautiful and insightful. She discusses the importance of education quite a bit, and the beauty of the world from her perspective. It’s a lovely little book–only 100 pages, plus another 100 pages of letters. Definitely worth the read for those interested in memoirs and history in general, or anyone wanting to get to know this amazing figure.

One thought on “The Story of My Life”