Well, I’ve finally done it. I can finally FINALLY say I have read James Joyce. 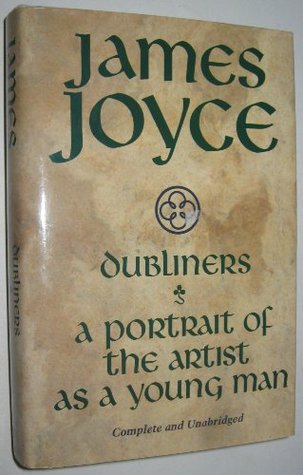 I know, I KNOW. That’s somewhat of an unpopular opinion in the literary field, but I just really really hate James Joyce. I’ve had this book forever. And I’ve tried to read it at least half a dozen times. This is the first time I’ve gotten through the whole thing to completion. And it’ll probably be the last. I might burn it. Honestly.

It was that bad. (No…I’m not REALLY going to burn it. Put down your axes.)

First–Dubliners. I don’t have much to say about this section of Joyce’s work. A bunch of short stories where nothing ever happens in any of them. Meh. Some people like that sort of thing. I don’t. It’s why I find short stories to be dull most of the time. Every once in awhile I’ll find a really brilliant one, but they just aren’t for me usually. *shrug*

The Portrait of the Artist as a Young Man is a whole other ball game of loathing. As I swore to myself I would–I read a chapter a day once I got to this section. Every day I fought against the urge to give up.

There are two major notations I had while reading this, make of them what you will. I couldn’t make heads nor tales of the actual story. I know it’s about an Irish coming of age story in a boarding school. That’s about all I’ve got.

1. Joyce is an author trying to write YA fiction, but he doesn’t understand teenagers at all. The voice sounds more like a kindergartner than a middle or high schooler, so I can’t figure out how old the boy is, except for the title I would think he were a toddler. (This note was written in the earlier chapters, I did figure out later he was in his later teens based on some of the sexual references and his desire to become a priest. I still found Joyce’s writing method very patronizing.)

2. While I find Catholic history/lore intriguing, I do not so much love to read lectures–and maybe that’s why I find Joyce so utterly impossible read. His writing is just one long sermon. When I read a book I do not want to be preached at.

My last thought about Joyce before I stop my rant is how much I hated his formatting. I think that is the #1 thing that made this book so hard for me to read. My brain could absolutely not comprehend that I was reading dialogue, when all of his paragraphs were cut up into dashes at the beginning of his indentations. Nope nope nope. My brain reads those as bullet points and lists, not speech, and what do I do with lists? I scan!

Fulfills PopSugar #20:  A book at the bottom of your to-read list