William Kamkwamba is one of those special people who, through lack of everything except sheer desperation and will, created something from the ground up that put his little village on the map. 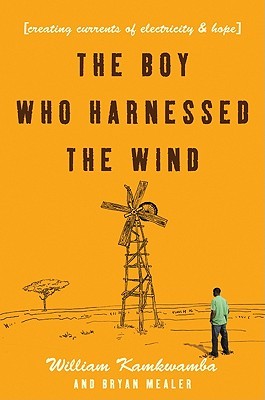 Malawi was torn apart by famine and disease when William was growing up. He experienced so much tragedy. It was hard to sit here, healthy, fed, and happy, while reading this book. I was continually frustrated, because I so wanted him to succeed, and life just keeps.beating.him.down.over.and.over.

William is SO smart. Could you imagine, not being able to go to school, and just picking up a couple of random books out of the library and figuring out the concept of electricity on your own without ever really seeing anything like it? I sure couldn’t. What he did was so awesome! He was in the middle of nowhere, and became an engineer. Here in the States, we have to go to Purdue to figure that stuff out!

This book is going to make you uncomfortable, upset, angry. You’ll probably cry. But, you know it has a good ending, because it’s nonfiction–and they wouldn’t give us a book about some kid who failed at building a windmill, right? Right.

Jokes aside, William’s story is pretty damn remarkable, and worth the read.