I grew up in a family that loves musical theatre. From the time I was young, we watched Disney movies and acted them out in our living room. The carpet was light blue, so it was often the ocean. Or, in the reenactment I remember most vividly, it was the Nile River, since The Prince of Egypt was one of my absolute favorites. The music in that one, am I right? I’m pretty sure we have video of it somewhere, too. Gawd.

Oh, and of course there were church plays. My most notable performance being some weird joke about taxes during “We Like Sheep.” The adults all though it was hilarious, but my partner and I had no idea what was so funny. I sure wish I could remember the punchline now. Something about keeping receipts in a shoebox. *shrug*

My sisters and father were also pretty heavy in our local community theater, show choir, the works. I was much happier putting on plays at home than in front of people, so I stayed in the audience.

Then I met my husband, who was equally enthralled with the theatre–I’ve told you about that before. 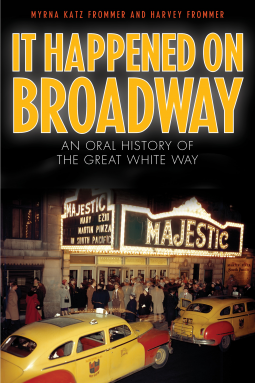 All this to say, when I saw It Happened on Broadway on Netgalley, I jumped at the chance to read it. I thought it was going to be a grand history of the stage, an in depth look at some of the most favorite actors, producers, etc.

Unfortunately…I did not get what I wanted. For people who grew up in the golden age of Broadway (that is to say, people much older than myself, living in New York City), this may be the perfect book. They are going to be intimately acquainted with the people speaking in this oral memoir.

But for me, this was a bunch of mumbo jumbo. I knew exactly one person–Carol Channing.

And instead of that grand history? It was as if I was at a party, trying to grasp on to pieces of conversation from everyone around me. I was so confused. This is the type of introvert nightmare that I avoid! There’s no structure, no chapters or themes. Just a bunch of people thrown together talking.

Now, maybe if this were done documentary style on camera where we could see the vibrant personalities, this would have worked terrifically. But with words on a page, it was lacking something.

As much as I love theatre and history, I am just not the target market for this book. It’s too bounce-around, and I’m just not familiar with the contributors. I mostly skimmed through and read a few, grabbing memories from people I recognized, but I just couldn’t finish the whole thing. It didn’t hold my attention long enough. I am not going to completely discredit it, though, because I am sure there are a lot of people who are going to find this oral history extremely amusing. It was just wasn’t for me.

Disclaimer:  I was given an ecopy of this book by Netgalley for review.

One thought on “It Happened on Broadway”