Sometimes you pick up a book and learn something you absolutely did not expect. When I saw Portia de Rossi had a book out, I thought “Oh, neat! I don’t know much about her, except that she’s married to Ellen.” And I love Ellen! So of course I want to read her wife’s memoirs! 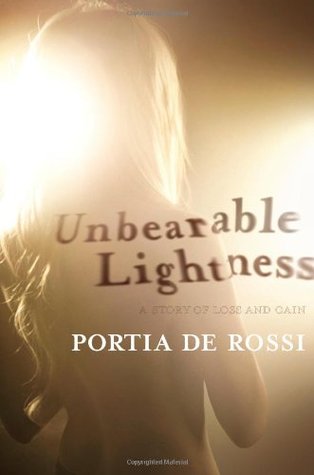 However, Ellen does not appear in the book until the Epilogue. If that is the only reason you are reading this…you’ll be disappointed. This is not about their relationship.

What I did not know about Portia is that she battled anorexia and bulimia from the time she was a teenager. She was a model and actress since she was 12, and she was constantly worried about her weight. I’ve heard about anorexia and bulimia in school and on TV, but I’ve never heard it described in such detail and through the mind of someone going through it. Portia does not hold back here, and this book is not for the lighthearted. I was all but in tears when she talked about being 37 kilos (81 pounds) and hardly being able to walk.

The Epilogue is encouraging. The good news is she did get better, and we’ve all seen her now. She’s gorgeous, and come on, she’s married to the most sunshiney person on earth. At least in their public persona (because no one knows what goes on behind closed doors), they are the happiest celebrity couple ever to be a celebrity couple. I wish them both the very best.